Starving Our Babies: The Newborn Sleep Book; A Review

Everybody needs sleep, so it makes sense that new parents want to see how quickly their newborn baby can sleep through the night. It just isn’t realistic, healthy or safe. Simply put, the method the Jasseys suggest is to stretch our newborn feedings to every four hours during the day, and completely night wean by one month. This is child neglect and starvation but if recommended by the pediatrician, falls not on the heads of the new parents.

The Jasseys boast a 90 percent success rate of babies sleeping through the night. I bet it’s true. I’d also like to see their practice 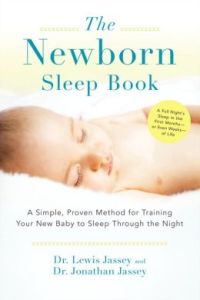 rates of breastfeeding past 3 and 6 months, rates of Failure to Thrive for those breastfed babies, reflux (from over-eating when so hungry), communicable illness, and “unexplained” infant death. Here is the video touting the Jasseys method.

This method is simply not for breastfed babies. But lets talk formula-fed babies. I’ve done the math which proves the case for newborn neglect. The AAP recommends feeding a formula fed newborn every 2-4hrs, 6-8times per day. A newborn drinks 1.5-4 ounces per feeding. So, the AAP recommends around an average of 20-25 ounces per 24hrs for optimal growth and brain development.

The Jassey method, if we give the parents only 10hrs of baby sleep without feeding (12pm-8am), and daytime feeding only every 4hrs, with a newborn tummy the same size as all newborns, would give the baby only 4 feedings a day. The Jassey’s suggest a newborn needs 4 feedings a day That’s a total of only 16 ounces max a day. But the Jasseys suggest that your baby can get up to 18 ounces if you divide the ounces out and bolster the other feedings, making every bottle 4+oz each- stretching the stomach and over-feeding. Except that a newborn tummy can’t hold this much food at every feeding, or stay awake long enough to do so, so they are setting parents up for confusion, challenge and disaster.

It is likely that baby may try to drink it all because they are now so hungry from spacing out feedings so long- and then spit it up a lot, have indigestion, crying, gas, pain. Still the book states the belief that more frequent feedings instead cause reflux, though the entire medical community dealing with reflux and the AAP and lactation professionals and infant nutritionists would suggests smaller frequent feedings.

The AAP recommends you wake your formula-fed newborn every 3-4 hrs in the night to feed them, if they don’t wake on their own to eat. This prevents failure-to-thrive. To quote the Newborn Sleep Book’s defense of not feeding newborns at night:

“You think your MacBook Air can take a good licking? You think a Bugaboo stroller is an indomitable fortress? These things are impressive but could they have survived during the Stone Age? Babies Did. Babies. Needless to say, not all babies survived such periods and tragically, there are babies over the world suffering from want. But if you bought this book or if someone gave it to you, the odds are overwhelming that you possess the fundamental physical and emotional resources required to raise a perfectly healthy baby- with the help of a relatively small amount of important advice.”

So, basically, because some babies survived malnourishment and hard times in the stone age and some babies survive malnourishment in the world now, we do not need to feed newborns at night because they are likely to survive without it. But why just survival? Why not promote public health, quality of life, psychological health and prevent suffering?  I sort of like that most of our babies usually thrive and aren’t starving here in the western world.  In the developing world, the World Health Organization encourages frequent breastfeeding for optimal health.

All of the other bad reviews of this book and Facebook slams blame the parents- those selfish parents. I can’t blame the parents or call them selfish. We all want to sleep, it’s an intense biological drive. And if our trusted pediatrician swears that night weaning is optimal for our parenting to be effective and for our child’s development, as the Jasseys promise, we may follow that advice. The main message in the book is that your instincts as a parent are not to be trusted, because they are too emotional, and that the doctors are to be trusted instead. That Newborn Sleep Book would like us to believe that our child’s sleep will be messed up for life if they don’t learn to sleep through the night as a newborn. Yep, I actually read the entire Newborn Sleep Book. It included this gem:

“Myth: Breastfed babies must be fed eight to twelve times each day. Truth: that’s only true until breast milk comes in- engorgement. But after that, a less frequent, more reasonable schedule is not only possible but beneficial. “

Here I went into reading it thinking that while it’s cruel to night wean any newborn, they must only be talking about formula fed babies- since breastfed babies must eat frequently to survive and stimulate milk production in mom. They go on to say that after the first 8-12 feedings of life, you can night wean and extend feedings the same way as with formula feeding. Wow. What a way to sabotage breastfeeding. This will keep milk production very low and then the Jasseys can recommend formula, which will make them look good by making sleeping through the night much easier.

It is also very dangerous for maternal health. Mastitis breast infection can easily come on for the mother of a newborn who suddenly begins sleeping through the night. Mothers would need to get up a few times per night to pump milk to continue milk production and to prevent clogged ducts and mastitis infection. So if mother is awake, why not feed baby. If we tell mother to sleep through, we are endangering her health.

They frequently say in the book that feeding on demand is unhealthy as well as that newborn babies should tell you when they are hungry by crying and not to feed them until it is the scheduled time or if they cry and not a moment before. The Newborn Sleep Book warns that your newborn not sleeping will lead to your own dysfunctional sex life, skin aging, car accident, decrease in brain tissue, lack of attractiveness to others, loss of memory and stroke.

Extreme sleep deprivation can be serious but so is the risk of newborn starvation. We need to advocate that parents get adequate maternity and paternity leave and encourage them to gather all sorts of family support in the newborn stage.

The primary theme in the book is that parents should not trust their instincts, but instead to trust nobody but Jasseys (apparently not even the AAP). The second theme is that a paren’t inability to deal with crying is what is causing sleep problems, that babies need to cry regularly and that your baby is never crying out of real hunger, it’s just that they are addicted to milk.

Infant sleep is a passion for me, it is 90% of my parent consulting practice. I was an extremely sleep deprived new parent so I understand the desire to sleep. But, I also have a strong desire to help babies and parents be healthy physiologically and psychologically; and for newborns to build attachment and strong growth patterns before we make big changes to sleep. I was an infant nanny and then postpartum doula of years before parenthood. Back then I used every sleep method including lots of controlled crying, weaning and cry-it-out when the parents asked me to do it for them. Sometimes the babies were very tiny. It felt wrong to me and eventually I couldn’t do it anymore. When I became a lactation counselor, I became even more clear.

With extensive research and practice and then my own parenting, I decided that not only would I not work with families in any form of controlled crying newborn babies are left alone or denied food at night, I would not even work with families on any sleep skills or gradual night weaning until the child is at least 4 months old, and only if the parents really feel they are going nuts without sleep. When babies are a little older, my gentle and gradual approach utilizes alignment with circadian rhythms while the parent remains present and 24hr nutrition is evaluated very carefully.