My little girl who plays with trucks and owns two neckties loves to wear flowers in her hair. Trucks, toolkit, dresses, bonnets, baseball caps, blue shoes with anchors, gold shoes with faux fur, pink nail polish on her tiny fingers because she begged, and the obligatory unisex item, jeans. Oh how she loves her jeans. 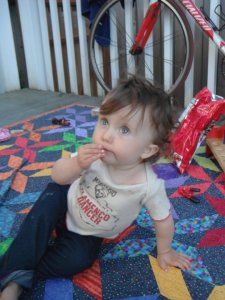 I recently wrote a popular post at Natural Parents Network called Ten Tips for Raising and Open-Gender Child. There were many who shared it online and I got tons and tons of positive feedback. I personally saw very little negative feedback but I do know that there were some who said “no thank you” on NPN’s Facebook site and some more scathing comments were deleted by admin before I could see them. I bet a lot of them didn’t read the article before they knocked it because I did see in a few places where people talked about how gender-neutral parenting was impossible or unrealistic. It is. Actually, I had said we were really into gender at our house, not at all neutral about it.

Other people (who didn’t actually read the article) said of me, the author,  “oh, well, she’s just more sensitive to this stuff because she is gay and all and probably grew up like a tomboy.”  No. I have always, always, always been a girly-girl to a fault. I wear pants only so that it is easier to crawl around the ground with children. My parenting relationship and partnership is very, very “traditional” with me being like “the wife” and my partner being a lot more like “the hubby.”

My wife understands what is it like to not conform to gender and many friends have explained this childhood and adulthood challenge to me, but I still don’t personally understand it. I was so lucky that who I was innately always was what people expected from me. And though I don’t personally “get it” I do know from talking to numerous non-gender-conforming gay and straight people that it is imperative to a child’s happiness to be allowed to play with gender if they desire to.

Still, what I really didn’t have room to go into too much detail about in that how-to article was my perspective that Gender is Play. Some people felt really threatened by the idea that their child should have choices in gender, especially in the category I’ll call “personal style”. Some people felt it went against their spiritual and religious truths. But my point was just that we should let our children play. They don’t know who they are yet, and that’s what is fun. Let them deal with conforming norms and stereotypes when they are older. It will be eventually be inescapable.

Everyday fashion can be playful even for adults. We decide what to wear based on our mood; we may put on something silly; we dress up for parties and Halloween. Our personalities are playful, we grow and change them, we experiment with them. We put on more feminine of more masculine “hats” depending on the task at hand.

Whether you identify as a feminist or oppose feminism, it has granted women the opportunity to work any job, to wear any uniform, to be the boss and it has granted men the opportunity to be stay at home dad in an apron. Everyone has a more of a choice now in place and purpose, choice in wardrobe, toys, mannerism, voice. We all play with our roles, with our identity, we all try to tap into the core of our being and express who we really are…and then we change again. Children change identity more quickly, more schizophrenically! To watch them is a lot of fun.

Childhood dress-up does not determine the child’s sexuality in adulthood. It is just what she or he is doing right now. They have to find themselves. Finding yourself is long, hard work and I believe that its easier to start early!

I wish for our children access to opportunity, to a larger variety of *fabulous* and mundane tools of creativity like clothes and toys; and I wish them a safe space without judgement. I’m not advocating inundating your child with too many choices or too much “stuff”. These gender play tools come from your closet, from the Goodwill, from her older brother.

Forcing gender conformity limits creativity in general and is often rebelled against anyway. Happy, well-adjusted adults didn’t have parents who told them “You can’t!” I want to say to my daughter, “You can! You can do anything and be anything!” (as long as it doesn’t hurt somebody else). And I just DARE anyone to tell me how a little boy wearing a purple tutu who wants to be called “Molly” today is going to hurt anybody.

The argument is usually that it will “confuse” the child. Well I ran into an adorable boy at the park today who told me that he was, in fact, the Spiderman. Do we tell him that he cannot be Spiderman because he is a mere mortal, not born with superhero powers because we are worried he will be become confused about his identify?  Of course not. With each identity we try on, we then take away some understanding of what it is like to be that person and that benefits us through our lives in all relationships.

How to you play with gender in fashion and roles everyday?